Book 1 in the Promise Cove Series 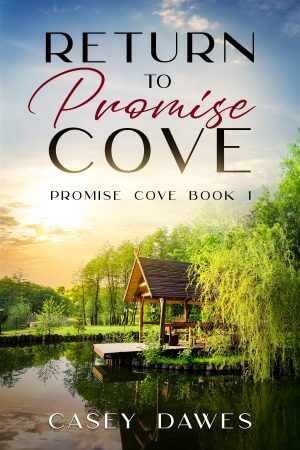 She’s a middle-aged rule follower. But there aren’t any rules for a dead husband with secrets, a new life in the wilderness, or a second chance at love.

Kelly Richards is forced to return to the tiny town of Promise Cove, Montana to handle an expected inheritance. She’s determined to sell the place quickly and go back to the life she knows. But a chance encounter with a first love makes her question everything she believes is true.

After a grueling career in the New York City police force, Ryan Svoboda came home to Promise Cove. Kelly’s unexpected return upsets his carefully constructed life. Can he tell her how he feel—how he’s always felt—before it’s too late?

Can Kelly break out of her rut to find real happiness? Will Ryan let her slip away from his life again? Or will they find the courage to reach for a second chance at love?

Return to Promise Cove is the first book in a later-in-life contemporary romance series set in a small town of artists on a northwestern Montana lake. Curl up in your favorite beach or armchair and enjoy this feel-good romance.

Buy Return to Promise Cove now and begin a new series set in the grandeur of the Montana Rockies.

A blue Ford Explorer was parked next to the house. Good thing she had locked up. She pulled in next to it, grabbed her parcels and headed around the building to the front door that looked out over the flower garden. While she couldn’t see anyone, she could hear the bangs of someone hammering out of sight.

Should she call 911? Was there anyone to help besides the man who’d been in the store?

She looked around for something solid. By the time someone got here, the person would be gone. This was rough and tough Montana. It was up to her to defend her property.

And she was so ill-suited to the task, she had to stifle a laugh as she searched through the kitchen drawers. Finally, armed with a rolling pin, she marched out the front door and stalked in the direction of the noise.

A tall, sturdily built man stood by one of the cabins, hammering a board beside a window.  As she drew closer, walking as stealthily as she could, he seemed to tense slightly, then relax.

“I know you’re there,” he called out. “Wait a moment while I get this last nail in.”

How did he know? She’d been quiet.

Finally, he turned, his hammer still in his hand. In a good fight she’d last ten seconds. But she gripped her rolling pin more firmly in her hand.

He looked down at his hammer. With a smile he said, “How about we both put down our weapons and introduce ourselves.”

Suddenly, she felt foolish. Quickly, she placed her implement on a nearby bench.

He put his hammer on the ground, raised his hands so she could see they were empty, then walked toward her, his dark brown eyes taking her measure, like he was trying to determine if she was friend or foe.

About her age, maybe a little older. His brown hair was shaggy, as if he cut it himself, and his face held decades of experience, not all of it good. There was something about him she recognized, although she didn’t know what. His movements were easy, far more natural than John’s had ever been.

“You must be Kelly Richards,” he said, holding out his hand. “Bruce told me you were here. I’m Ryan Svoboda.”

She took his hand as he said his name and everything clicked into place.

Ryan, the boy she’d crushed on when she was a young teenager, the one who’d given her her first kiss.

“She takes her time. It’s nice to read a story about someone dealing with the issues of someone past 50. We women take care of everyone and tend to put our lives on the back burner. And, to top it off, I love the mountains and would love to move to this little town!” ~Nancy Mntr

“You not only get great characters that slowly share their pasts but also a story of friendship spanning years, reliving fond memories as well as a love story and seeing that no matter your age you can still have a HEA with love and life.” ~ Fleur W.