Book 3 in the Promise Cove Series 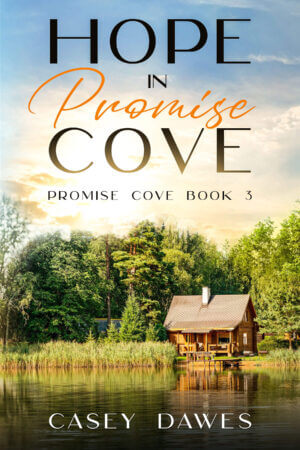 Her widowed life revolves around work. He loves loud music and fast dancing. Can the sparks that fly between them turn into love?

Alex Porter believes she’ll never love again. A well-regarded artist of wood furnishings, she’s created a solitary life in Promise Cove. Although her friends complain she can be prickly, life is just the way she likes it.

Until he moves in next door.

After a traumatic childhood, Sal Rivas keeps life casual. He travels the country in his converted van, picking up work as a casual laborer, and spends his evenings crafting poems and short stories. He’s not opposed to a carefree romance, but not with his neighbor, a woman with wide eyes and vulnerable heart.

She wants him to go away, but there’s something about the angles of his face that draws her closer. He wants to know what makes her tick, but if they get too close, both of them will get burnt. Can they make it past their differences and open their hearts?

She wants him to go away, but there’s something about his energy for life that draws her closer. He wants to know what makes her tick, but if they get too close, both of them will get burnt. Can they make it past their differences and open their hearts?

Set in the glorious country of western Montana, this heart-warming story will delight fans of clean small-town, seasoned romance. Get comfortable in your favorite chair and become lost in love’s promise.

Buy Hope in Promise Cove now to return to the small-town art community set in the grandeur of the Rocky Mountains.

Alex lost herself in the colors of the bowl she was scraping. The wood had a lovely grain, the result of a twisting and tortured lifetime on a high cliff. Once she smoothed and polished, it would be the perfect addition to someone’s sideboard.

Maybe she’d charge a little extra for this one. Start saving for the next round of quarterly taxes.

A loud rumbling seeped into her workshop. The rhythmic thumpa thumpa took over her nervous system, interrupting the flow of her movements.

She put down the bowl and scraper. Whatever that noise was, it had to stop now. The house next door was empty—she was supposed to be keeping an eye on it while the couple who lived in it were off working in Colorado.

Stomping out the back door, she went around to the front of the house.

A large red van with a yellow and orange flaming stripe down its side was smack in the middle of the neighbor’s drive. The noise suddenly stopped, and she could finally hear the crows protesting from the nearby pines.

The driver’s door opened, and a man stepped out. He wasn’t much taller than she was, but his longish hair was a dark brown, except where the sun glinted off streaks of gray. His skin was the light brown of a freshly peeled Doug fir.

He took his sunglasses off, giving her the same frank gaze she must be giving him.

This must be the man Maggie warned her about. But her friend had failed to mention the dramatic lines of his face: His wide eyes, framed with eyelashes it seemed only men could grow, contrasted with a sharp nose, and full-lipped mouth. It was not a handsome face, but her fingers itched for the right piece of wood.

She could see it in her mind’s eye, a high-grain surface, carved with all the right angles …

“Who are you?” She widened her legs and planted her feet firmly.

“I thought I was about to be dinner, the way you were looking at me.” He grinned, and her interest—which was purely artistic up to that point—took a turn to something else. Something she refused to examine too closely.

“Who are you?” she repeated. She’d left her phone in the studio, playing the soft jazz she used for bowl scraping.

“You’re obviously my new neighbor.” He took a step toward her and held out his hand. “Salvadore Rivas. My friends call me Sal.”

“That house wasn’t sold,” she said, refusing to believe what he was saying. Her neighbors were quiet and frequently gone on one adventure or another. She did not need this man, with his bright van and loud music next door.

He shrugged and dropped his hand. “I’m house sitting.”

“You can’t be. They asked me to look after the place. They would have told me.”

Salvadore …Sal … whoever … held up a key. “It’s legit. David Brisbois—he’s my new boss—checked with them. They said I could housesit for the summer.”

Again Sal shrugged. “Don’t know what to tell you.”

Sal’s face hardened. “And why is that?”

In her mind’s eye, she could see him as a character in a street gang movie. It took everything she had not to take a step back. “I’m an artist. I need quiet.” She gestured at the van. “You’re too noisy.”

He stared at her for a second. “Too noisy?” Then he began to laugh, a big, deep, not caring if anyone was watching, laugh.

His face transformed again, the menacing look gone. When he finally got ahold of himself, he shook his head. “I’ve been told to leave for a lot of reasons, but being noisy is a first.”

He shook his head. “I guess you’re going to need to learn to live with a little Latin,” he said. “It will be good for you. Loosen you up.” He looked her up and down in an exaggerated and non-sexual way. “You’re a little tight.”

“And you are obnoxious. I can’t believe David hired you. I thought he was a better judge of character.”

“I think he liked my van,” Sal said. “So here I am. We should get to know each other. I’d offer you a beer, but I have to go shopping after I get my stuff unloaded. Maybe later?”

“Not happening. I have work to do. Work requiring sharp objects.”

“Maybe later then. The offer stands. When you’re done with sharp objects, that is.”

“I suspect you don’t think much is funny.” His smile disappeared. “Okay. I’ll stay out of your way, and you stay out of mine.”

“Don’t play your music so loud.”

“Oh, no, amiga. I’ll play my music as I like it. Loud with a beat. Get some earplugs.” He grinned again. “Or you could learn to like it. Come by, drink a beer, and I’ll teach you to dance.” He waved. “Got to get it done before that nice lady at the general store closes up for the night.” He disappeared around the back of the van.

Of all the nerve.

She stomped back to the workshop, her heavy boots thudding on the wooden walkway.

Here? He was moving in here? Where was the justice in that?

This was becoming the most frustrating day in her year so far. First, Gower called to pressure her into submitting some kind of artistic piece—the kind of work she hadn’t done since she’d left his studio.

And now this hip-hopping rude man had moved next door.

A man who’d sparked something within her, an unexpected twinge that felt like an emotion she’d known long ago. A feeling that meant disaster.

“With remarkable descriptions of Montana’s mountains, forests, lakes, you can almost smell the clear, cool air, hear the lake water rippling. I want to move to Promise Cove.” ~ Grace G.

“A well written book in a small-town setting with characters that are real. It’s a sweet, heartwarming story of friendship, community and finding yourself made this story hard to put down.” ~ Jacqueline C.