Book 2 in the Promise Cove Series 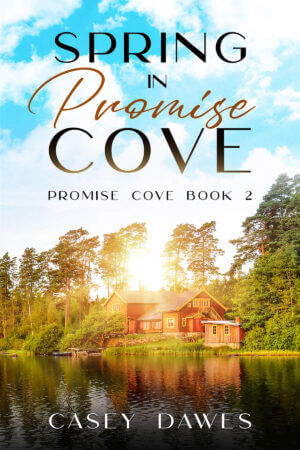 One small town mayor with dreams as big as her heart. Two very different men vying for her affection. A distraction? Or a chance for true love?

Mayor Maggie Marston is determined to build a performing arts center in Promise Cove, but everything is going wrong. When contractor Justin Thomas buys a summer home in the area and immediately pitches in, she thinks all her problems are solved.

Sheriff Tom Gerard has loved Maggie since he shared his Hostess cupcake with her in first grade. He wants more, but is afraid to lose their deep friendship if he makes a move. When Justin arrives in town and threatens to steal Maggie’s heart, he realizes he may have waited too long.

Torn between two men, Maggie’s attention to her project frays. Her relationship with her teenage daughter becomes strained. When a crisis hits, she’s forced to decide what—and who–really matters to her. Only one man can truly help her. Will she make the right choice in time?

Set in the glorious country of western Montana, this later-in-life tale will delight fans of clean small-town romance. Prepare a cup of your favorite tea and snuggle up with this exciting love story.

Purchase Spring in Promise Cove on Amazon now and return to the small-town art community set in the grandeur of the Rocky Mountains.

Teagan arrived around two to give her a break, and Maggie headed for the tiny space under the stairs where she’d carved out an office, ready to release some pent-up frustration.

“How dare you not tell me?” she began, knowing he would immediately recognize her voice. They’d been friends since elementary school when he used to share his Hostess cupcakes with her.

“Finally. After telling everyone but me.”

“I didn’t realize she’d told him.”

“Apparently.” Maggie stressed the last syllable. “You should have stopped this harebrained scheme. Or told me so I could put an end to it.”

“Elaine seems quite determined to go. And I checked out the man in Paris. Perfectly respectable.”

“Don’t you know that’s what they say about serial killers? ‘He was such a nice man.’”

“Don’t you dare laugh at me, Tom Gerard. This is a crisis and you know it!”

“Calm down, Maggie. Everything will be fine. How about I take you out for a beer at Moose’s after you close the store, and you can tell me what a rotten man I am.”

“Hope springs eternal. I wish I could understand why not.”

“That’s a great reason to date. They say friends make the best relationships.”

“Until it goes south, and they never speak to each other again. I would lose both the relationship and the friendship. Nope. I’m not taking that risk.”

“Well, the offer stands,” he said.

“Why don’t you go catch some bad guys,” she said.

“I’ll do that. See you.” He disconnected right when she realized she wasn’t done yelling at him.

She pulled a pile of scribbled notes in front of her. They were her effort to be a little more on top of the stock for the store. While she enjoyed the interaction with people, the minutiae of stocking, pricing, and the annual inventory ground her down. Fortunately, everyone, including her two closest friends, had joined in during winter’s gloom, and their many hands had made light work of the chore.

Of course both of her friends had gone to Hawaii while she stayed home. Kelly had finally honeymooned with her new husband, Ryan. Alex had accompanied Julia Leonard, a talented musician they’d befriended in the fall, to a recording studio on Maui.

Instead of doing the work that needed doing, Maggie called Kelly.

“I need you,” she said as soon as Kelly picked up. “Teagan has her own life, and my mother has gone temporarily insane.”

“Teagan is almost eighteen and deserves her own life. But it is a difficult adjustment,” Kelly said. She’d had her own nest empty out the year before. “But I’ve always thought your mother was merely eccentric, not insane.”

“That is a bit drastic. Is she happy about it?”

“It’s not funny. Why doesn’t anyone get that this is a crisis?”

“Okay, okay. Tomorrow’s Wednesday. Think you can hold off your breakdown until then? It’s about time for a meeting of the Promise Cove Renewal Committee.”

“You’re going to have to,” Kelly said. “Ryan and I have plans for the evening.”

Maggie disconnected and put the phone down on the desk. Everyone else had somewhere better to be. When her dad had died the summer after her first year in college, Maggie had stepped up to run the store. Once she’d wound up pregnant, she permanently put her dreams aside to take care of her child. And now she was stuck in Promise Cove. Forever. Her life was over before she’d really had a chance to live … or find true love.

“This book is beautifully written. You will love each and every character. You will want to live in Promise Cove. Trust me. Buy book one and read it, then you’re ready for book # 2 when it comes out. SO glad I found Casey Dawes on Facebook. I have enjoyed reading all of her books!” ~ Kelly D.

“The characters are as real as my friends and neighbors. The emotions they feel and the situations they find themselves in are natural and legitimate. It is wonderful to read about women entering their second and third acts of life.” ~Margaret Guerrera