Travel to Yellowstone–Not without Adventure 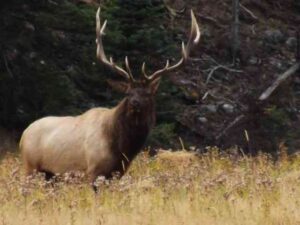 My DH and I had been looking forward to our camping trip to Yellowstone National Park for months. It’s the 100th anniversary of our national parks, and we were eager to travel to one before the year ended. Two years ago our trip had been gorgeous.

This year … not so much!

Although rain had been predicted, we figured we could weather it. When the sky blued as we traveled east along the Madison River, our optimism increased.  The animals began to appear. Trumpeter swans gave way to elk. We started our own park traffic jam by taking pictures. People sincerely don’t get the effect they have on animals.

The second place we stopped for elk pictures, brought the rangers down upon the group. Justifiably so. Four or five animals trying to get to the other bank of the river. A line of people standing there, looking at them. 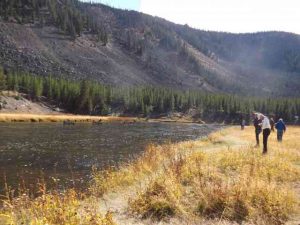 The rangers cleared the people, and the elk continued across, followed by the bull elk that had finally managed to rouse himself from his mid-afternoon slumber.

Tent went up, and we were puffy with pride at our new air mattress which looked inviting enough to crawl right into. And then? The rain. No, let me correct that. The deluge.

We scrapped cooking dinner, ate at the Snow Lodge, and returned exhausted. After a few seconds of lying down, though, altitude sickness struck. I don’t think I ever felt so panicked in my life. My DH suggested a drive, and then I got my breath under control. However, when we returned, our tent looked like a wet puddle, and any thought of lying down scared me.

We spent the night in the car, deciding to bail the next morning, especially since there was nothing in the forecast but rain … and a slight chance of snow. 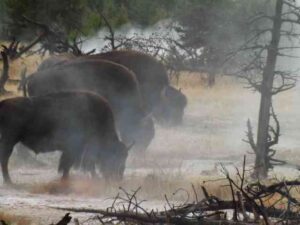 We didn’t want to leave first thing, after all we’d driven over four hours to get here. So we ignored our aching bodies, the rain, and took off to find breakfast and explore.

Yellowstone is an amazing place. The mists of the geysers, the animals, and the fact that you’re driving around inside the volcano caldera, make it a unique experience. Combine some of those factors, and there are photography opportunities everywhere you look. Even in adverse conditions, the impact of nature on the senses gives a feeling of being reborn.

But we are in danger of loving our parks too much. The solution, like much of our nation’s woes, lies in bringing disparate groups of people together and talking it through. That, and each of us taking responsibility to keep ourselves, the park, and the animals that live there, safe. It can be inconvenient at times, but getting too close, especially to an excitable male in the fall, can be far worse than that.

Thanks to Theodore Roosevelt, Gifford Pinchot, and many others like them, we have thousands of acres of natural beauty and resources left. Tourists from all over the world come to see our parks. It’s the hundredth anniversary. Likely you have a national park or monument near you. Pay it a visit in honor of all the people who’ve made it possible, the animals, birds, and fish that live there, and the land itself.