Prequel to the California Romance Series 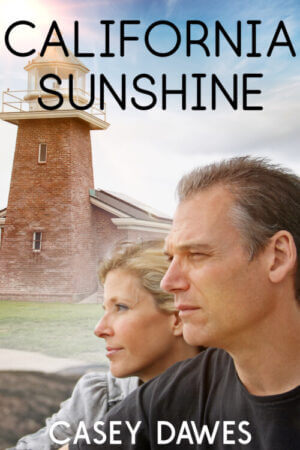 Can an aging hippie and a straight-laced teacher rekindle a second chance romance on California’s central coast?

Bookstore employee Sunshine Mondrake has two passions that make her life complete: her sixteen-year-old daughter and her causes. An aging hippie, she left romance behind when she became a single mother … until she meets her daughter’s high school teacher … an old flame from her commune days.

Richard Campbell had put the commune and girl out of his mind decades before. He’d totally turned his life around, becoming a conservative, respectable high school teacher, an oddity in the liberal California coastal town of Santa Cruz. His life was orderly, well-maintained, and not open to a relationship with a woman who insisted on being on a protest line on a regular basis.

But the spark between them remains. Can they bend enough to entertain a second chance romance?

Readers familiar with the culture of the central California coast, who like older heroes and heroines will enjoy California Sunshine, the prequel to the California Romance Series.

Click on a book cover to learn more about each title.

“What is your problem?” Sunshine Mondrake called out to the buttoned-down man grading papers as she strode past the tumble of desks and chairs, her sixteen-year-old daughter, Redwood, trailing behind her.

She sensed Redwood’s total embarrassment, but that didn’t stop her. This teacher needed to be taken down a notch. How dare he give her daughter a C on her term paper simply because Redwood had written it in free verse. Creativity needed to be encouraged, not squashed.

Besides, Redwood was about to enter her junior year, the crucial year for getting into college.

“Excuse me?” He pulled off the wireframe glasses pseudo-intellectuals liked to wear and looked up at her, his sky-blue eyes promising more than the narrow-minded professor his grade seemed to indicate.

Damn, he was good-looking. If he weren’t such an ass, he would be nice to have in her bed.

He steepled his fingers and smiled at her.

She’d already had him in her bed.

Pain she thought she’d dealt with more than two decades ago shot through her veins. Richard Campbell had been the first of the trifecta of male betrayal in her life, but he was the worst.

“A delightful love story. A woman caught between a teen daughter and well-meaning mother and battling her own struggles to find happiness. Follow her rocky journey to love. Something has to give – always does. But so much is gained. Love this story!” ~ Gypsy Girl