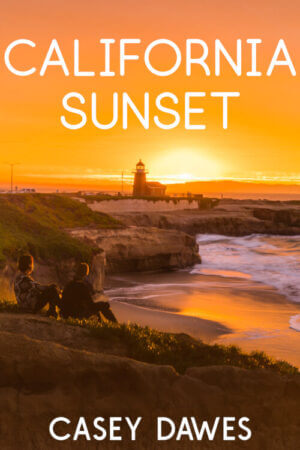 She’s a single parent of a teenage son who’s just lost her high-paying technology position in Silicon Valley. He’s a widower from Montana who’s looking for a new start revitalizing the iconic Ocean Reads bookstore. Will life ease up enough to give them a chance to fall in love in this California coast romance?

As a divorced mother, Annie Gerhard’s friends and social life are enmeshed with the California coast. It’s the only home her 15-year-old son David has ever known and his father lives there, but she needs a high-paying job to maintain their lifestyle. A recession has made jobs in the Silicon Valley hard to find—especially for a woman in technology. Does she need to move somewhere else to give her son the future she wants him to have?

Widower John Johnson has escaped Montana memories of a deceased wife and betraying girlfriend by buying an independent bookstore in California. Now he has to make it a success in spite of a recession while settling himself and his horse into a region full of traffic and people.  Being attracted to a spunky woman with control issues is not on his to-do list.

California Sunset is a story about two people facing real life issues who must earn their chance at love. If you enjoy women’s fiction with romantic elements, you’ll enjoy this book.

(Warning: This story is an abuse survivor romance and may trigger people who have suffered.)

Available at Amazon and other online retailers.

Click on a book cover to learn more about each title.

Annie strode into her boss’s office to answer his summons. Maybe I’m finally going to get a bonus this year! It would be great to be able to sock that money away in David’s college fund.

She grabbed the printouts off Randy’s chair and dropped them to the floor with a thud.

“It’s going great, Randy,” she said. “The next piece of the project is nailed down and we’re still on track.”

“Close the door, please,” he said.

“I’m counting on this project to showcase what I can do for the company.” Annie shut the door and plopped down in the chair, her pen poised over her pad as she leaned forward. How should she react? Surprised? Matter of fact?

Randy cleared his throat, his Adam’s apple bobbing in his scrawny neck. “I’m afraid the project has been terminated.”

“JCN needs to cut costs,” he started. “Ten thousand people are being laid off from the company.”

“There’s got to be another project somewhere.”

Randy pawed through the papers on his desk. “There is another project you can apply for. You’d be great for one in New Jersey and they could use your skills. It’s complex and government-mandated—one of those impossible situations you’re good at handling.”

“I can’t move to New Jersey.” She’d been to New Jersey once—boardwalks, billboards, and Bruce Springsteen. Not a place she could ever imagine living. And she couldn’t drag her son away from his friends. He was only fifteen.

“C’mon, Annie. Give it a chance. I’d hate for the company to lose you.”

She shook her head. New Jersey may have been fine for Frank Sinatra, but it wasn’t fine for her. It had taken so long after her divorce to feel secure again. She had her friends, her home, her cats.

“There’s nothing in the company in this area for someone with your skills. I looked. If you aren’t willing to apply for the job, then I have no choice. I have to lay you off. Even if you do apply, there’s no guarantee that you’ll get the job in New Jersey. You may be laid off anyway.”

Her stomach dropped and the bitter smell of Randy’s coffee became nauseating. She stared out the window, not really seeing the rain-greened California hills, unable to believe what she was hearing. What was she going to do?

Randy’s voice streamed around her, and her mind snagged phrases like “severance package,” “layoff procedure,” and “resume class.” She gripped the arms of the chair as if she was trying to steady a rocking boat.

An ache began in the back of her neck. She needed this job. No one else was going to support David or provide medical benefits. She was going to have to do something to keep a salary coming in. And with the economy the way it was, chances of finding a new job soon would be slim, especially for a thirty-five-year-old woman. Unemployment wouldn’t cover her mortgage, much less her other expenses.

Maybe she could learn to like New Jersey. After all, she liked Bruce Springsteen. Boardwalks and billboards might grow on her. There was an ocean, even if it wasn’t the Pacific.

But what about David? Would her ex fight her for custody if she tried to move their son out of state? Her stomach roiled and she forced back the tears welling in her eyes. Never cry in the office. Never.

“You have six weeks before the layoff is final.” He gathered papers into a folder. “In the meantime, look these over. Annie?” He held the papers out to her. “I really hope you change your mind.”

She took a deep breath, looked Randy in the eye, and took the folder, feeling like the proverbial truck had just slammed into her. But she wouldn’t show it if she could help it.

So she threw back her shoulders and marched to her eight-by-eight office. Gently closing her office door behind her, she hurled her pad, pen, papers, and keys on her desk. Damn! She ran her hands through her curls. It would make her already frizzy hair stand out like Young Frankenstein’s, but she didn’t care.

Tears rolled down her face. She was tired of being the strong one, handling everything by herself. And now this. She’d worked at this company for eight years. How could they lay her off? Or worse, send her to godforsaken New Jersey?

She slid her laptop and Randy’s folder into her canvas bag and put on her “gently used” Burberry raincoat. Her head held high, low heels sounding a brisk staccato on the cement walkway, she strode out into the chill March air to the parking lot.

Her mind raced as she opened the door to her Prius. How could she move to New Jersey, leave behind her friends, and abandon the small beach bungalow that had been her sanctuary ever since the divorce? On the other hand, how could she give up a job that provided security and benefits for her child? David was going to go to college soon. Being laid off would destroy the nest egg she’d built for his college fund. Her ex wasn’t going to be any help. He could barely take care of himself. She slammed the door a little harder than she meant to do.

What would David think about moving to New Jersey? Could she make him understand? David was doing his part. He kept his grades up and practiced soccer faithfully. She was so proud of him and she couldn’t let him down.

“Her characters are believable, likable, easy to identify with and her story unfolds smoothly. I read the book in a little more than one day and couldn’t put it down.”