On first glance, these might seem like odd topics to mix together–American freedom and romance. Like the “great American novel,” romance stories have characteristics that evoke the “land of the brave and the home of the free.”

Even though there are many romances follow what are commonly called tropes (billionaire man, poor girl; sheik and his captive, rugged marine and the woman he rescues…), there are plenty of stories out there where either heroine or hero must free themselves from beliefs and habits that aren’t working for them anymore; traits that ultimately get in the way of true love.

These types of freedoms are just as important as rugged individualism, the freedom to carry a gun, religious freedoms, and the right to marry whom you wish, if not more so. Getting rid of huge swaths of people will not make America great again; pointing the finger at anyone else for your actions or problems has never worked before, and it’s not going to now.

“For I see that you are in the gall of bitterness and in the bondage of iniquity.” Acts 8.23

Like Hollywood, romance has a “white” problem. Too often our heroes and heroines are white, privileged, and straight. Don’t get me wrong. There’s plenty of people like that in my stories. They say write what you know, and that’s the world where I sit (except for maybe the privileged part). But I work hard to include others who have cultures and lives different from my own. I’ve been lucky to be included in family gatherings of Latinos, Thanksgiving traditions of southern black folk, and family dinners with Native Americans. Working in the tech world exposed me to plenty of Asians, and my coaching clients have included Chinese acupuncture practitioners  and Korean doctors. 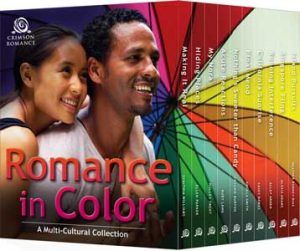 I’m proud to be working with Crimson Romance. They actively solicit submissions about people who are different. Not to put the books in a type of ghetto, but to integrate with the larger romance populations. My recent story, California Sunrise, featured a Hispanic couple dealing with the issues of autism and immigration. It’s part of the Romance in Color bundle.

Want to expand your cultural horizons without leaving your living room chair? This collection is under a dollar and available for a limited time.

Who is responsible for your freedom? I’m afraid it’s you…and me…and everyone else in this great country of ours. We don’t need to make it great again; we need to burnish our lamp and provide the fuel that makes this the land of opportunity. Don’t have a degree or job skills in this upside down economy? Figure out what you need to do and go do it. Don’t like what Congress is doing? Vote. Don’t like how veterans are being treated? Learn about what’s wrong and right and fight to fix what needs fixing. Run for office if you have to.

Only by finding your freedom and holding it high aloft, can you have the courage and loyalty it takes to form a great love partnership and family.

God bless us, every one! ~Dickens