My last California novel, California Sunrise, was released in June. It’s gotten great reviews for its today’s-headlines tie-in (immigration), and will be part of a bundle, Romance in Color, releasing November 16, 2015 (Hint: Get your copy of 10 books for under $1–available for pre-sale now.)

Winter crept into Montana on Halloween this year. We don’t have snow (yet), but the cold and damp are bold-chilling. Too bad I don’t write horror novels. This weather is conducive to it.

Instead, I cook. Today I made bread. Dinner tonight is a jalapeño-avocado soup from With a Measure of Grace: The Story and Recipes of a Small Town Restaurant Hardcover June 30, 2004

, a book we found in our camping travels in 2008. Those are our meals in Montana.

Boulder is a very small town, (in 2013 the population was 222) with a very famous restaurant. It was featured in Oprah’s magazine, O, as well as other newspapers and magazines. The cookbook is worth reading for the story of how two businesswomen converted a conservative Mormon town, but the recipes are amazing.

My DH loves the Cowboy Meatloaf. I make it once in a while, because while it’s yummy, we find we’re eating less and less meat. Tonight’s soup appealed to me on several levels.

It’s a memory soup. We ate at that tiny restaurant in that tiny town amid amazing scenery.

It’s comfort food. Did I mention it’s got eight cups of cream in it? (Ours comes from Kalispell Kreamery.)

I connect with cooking at an elementary level–as a woman, as a Montanan, and as a human being. Food keeps us alive. Good food hints at immortality.

Unity in Love Stories and People
Romance and Wine 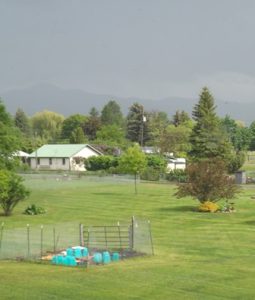