When she was older, she married imperfect men, while trying to hide her own flaws. Her parents’ lessons were passed down to her children, with a few more of her own. She did as she had been taught, never questioning, always surrounded with a vague unhappiness.

Her sorrow drove her deep into the wild, near the rushing of a mountain river. There she bundled all the lessons she had learned, as well as the lies she’d told herself, wrapping them in the branches of the brush and trees. She placed them in a cleft of a mountain, not to destroy them, but with the knowledge she didn’t have to carry them anymore.

Then she began to notice the teachings of the wild: the caution of the rabbit, the keen eye of the falcon, the many sides of a flower. She learned that most things aren’t black or white, but shades of gray, and that listening to the world around her made the colors brighter and the sounds more vibrant.

When her hair was long and gray, she went into the world to sing her own song, in hopes others would hear it and take heart.

Her song is found in the books she writes, books that can take a person who aches beneath the stress of daily life and transport them. They are an escape to others’ lives. And when the reader is finished, they might be inspired to pluck up their own courage and begin again. 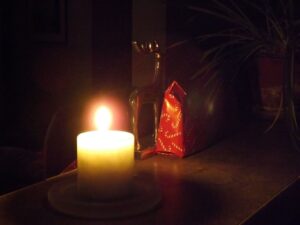 Peace of the Season
Life Lessons from Romance: Freckles