Somewhere around 2005 I decided I wanted to write a romance novel. I had no vision of writing a romance series. I enjoyed them, and I’d finally found a man who wholeheartedly supported my dreams. My kids were out of the house for the most part and I’d just…er…left my job at a tech firm. 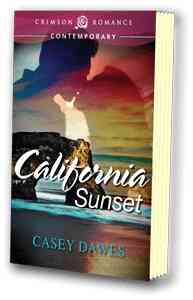 California Sunset was the book that evolved from that era. I hadn’t intended to write a series…only one book. That book was stalled for several years as the economy happened to me and we moved to Montana from California. The week I got here I was thrust into the heart of a burgeoning chapter of RWA.

A year later, the marvelous Rionna Morgan, head of our little band of writers, let us know about a new publisher looking for submissions–Crimson Romance. Due to matters beyond the book world, Rionna is now in law school and the world is missing a wonderful writer.

I hesitated. She pushed. I went for it. Crimson Romance accepted it!

Only one problem…they wanted me to remove the subplot.

Enter California Wine. During our courting days, my husband and I had decided, on a hairbrained

whim, to write a book on the wineries of the Santa Cruz Mountains. That research came in handy for writing this book. I expanded Elizabeth’s story, found her a new hero (according to my friend and author Danica Winters, the original one was an ass), and learned all about making ravioli. I took virtual trips to the Liguria region of Italy (thank you Google Earth!), and, of course, drank wine.

As I had with California Sunrise, I drew on a lot of my own experiences–familiar winemakers and vineyards, a strange hotelier from Washington, and a friend’s efforts making home-made spa treatments. Specific places in the Santa Cruz area served as locals, as did the varied and lush scenery.

It’s also one of my favorite covers!

I knew I wanted to write something about the veterans of our longest wars as they returned home. 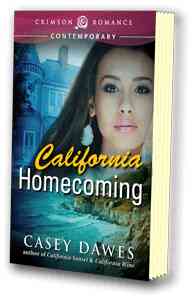 This is a theme I’m returning to in the new series I’m developing. Elizabeth’s daughter, Sarah, had engaged me in California Wine, so I had my female character.

In addition to drawing on life experiences, I enjoy researching. In California Wine it was making ravioli. In California Homecoming, I learned about the effects of having a prosthetic, surfing schools for wounded veterans, and the marvelous Fisher House.  While I’ve never owned an inn, I did once own a house from the 1800s and spent numerous hours scraping wallpaper and fixing antique plumbing and wiring.

Our landlords have a golden retriever named Daisy that I love very much. Once Sarah arrives at the inn, Daisy turns up, ready to take her place as overly affectionate guard dog. A few characters in the book provided the heroines for the next two books in the series. 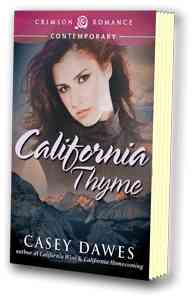 Sunrise.  There were a few movies being made on the coast and I knew a few caterers for movie sets. In addition, I have a masters degree in theater. Not movies, but close. I have a good idea of the characteristics of many of the people involved in the business.

Researching catering trucks was a blast. They cram everything into those tiny spaces. It’s phenomenal.  Understanding the current research on bi-polar characteristics was equally interesting, but sadder. Some of my relatives in my father’s generation were diagnosed with it, so it was something that affected me personally. While I never developed the symptoms, inheriting it was a concern for quite a while when I was younger. So what would happen if one of Mandy’s parents, an actress from Hollywood, was bi-polar?

Throw in a fear of all things movie, a reduced work-load at her waitressing job, and a job offer from a good-looking movie director, and I had a story. I love Yosemite, especially when it’s uncrowded, so it was also a great opportunity to set a story amid gorgeous scenery.

Alicia Fuentes stole my reader’s hearts in book three. At the end of book four I hinted that her little 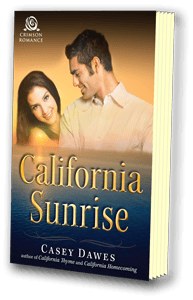 boy might have a problem. For a number of reasons I was interested in the autism spectrum. As a society, we don’t have the resources or ability yet to deal with all the problems children have. A friend of mine has an autistic child, and I’ve watched her struggle to deal with the challenges.

While I was contemplating the hero to go along with this incredibly strong young lady, I saw something about Dr. Ramon Resa, an incredible man who turned out to know an old Santa Cruz friend. My hero was born. An episode on a news show, telling about a woman who’d come home from school at fourteen to find her entire family had been deported, gave me an additional backdrop for his life.

Throughout this series, I’ve been blessed by two amazing editors from Crimson Romance, Jess Verdi and Julie Sturgeon. The books are better for their work.

To my great delight, Crimson Romance is offering all five books as one e-book bundle, California Wishes. Enjoy! 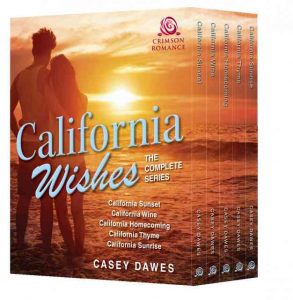 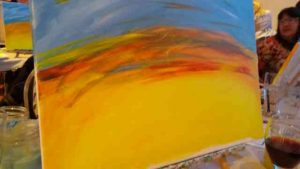 Stretching the Right Side of the Brain 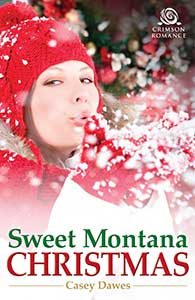