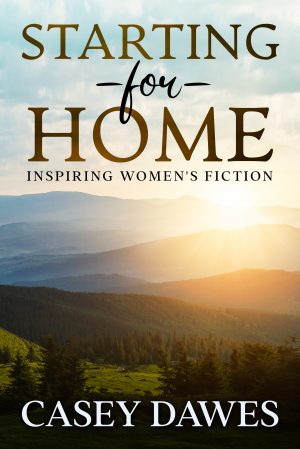 Succeeding in the oil industry obsesses her. A friend’s tragic accident makes her face the truth. Is her future going to bring joy? Or destruction?

Gerri Keffer is determined to excel in the rough world of oil extraction and climb the corporate ladder like her father and older brother before her. Now she’s landed a job as a production supervisor in the oil fields of Wyoming. She doesn’t have time for friends—old or new—or even a second glance at Kaiden Beck, a good-looking guy from Montana. The only valve she has for stress release is rock climbing where she too often takes extreme risks.

The tragic accident involving a lifelong girlfriend makes her question her life’s choices for the first time. Is she doing what she really wants to do in life? Or has her entire plan been a reaction to what she thought her parents wanted from her? Will success bring her happiness? Or is there another key, something she’s missing, to life’s joy.

Starting from Home is a woman’s fiction novel set in the drilling fields of Wyoming. It is the fifth full-length novel of the Rocky Mountain Front series. If you like western women’s fiction and family sagas, buy this book today and join those who have already discovered the strengths and loves of the Beck family.

Where to Get It

Gerri studied the rock face. There was truly only one path up. It was a common climb for those with intermediate skills. Definitely something she could do. Why was she hesitating? She rarely did that, figuring she could always recover if she made a misstep.

And with the rope, the worst that would happen would be a short fall and a couple of bruises.

She took a deep, steadying breath and yelled out, “climbing.” Then she grasped the edge of the crack and swung her leg into position to brace for the next move.

Her leg strained with the unaccustomed position. She was going to need to train harder for these types of maneuvers if she wanted to advance in the sport. The routes were only going to get more challenging from here. Her bucket list included El Capitan in Yosemite. Images of lit tents hanging from sheer granite drew her every time she saw them. She could imagine the total quiet, except for the murmurs of other overnight climbers, and the massive number of stars scattered across the night sky, framed by the dramatic cliffs of the famed valley.

About three feet from her last anchor, she wedged a new one into the cliff and threaded her rope through it. No matter how much she was ready to take a risk, she was also aware of the need for safety. She was only twenty-eight. No need to die just yet.

The ascent through the crack was in some ways more difficult but in other ways easier than the climb up the rock face. She was more experienced with the straight-up climb, but the crack allowed her to leverage her whole body by bracing against one side as she moved upward. She ignored the pinpricks of pain from sharp edges.

The crack narrowed as she climbed, forcing her to be more precise in her actions. She could barely fit inside the opening, the narrow walls providing an unexpected and unwelcome claustrophobia. Every so often her foot slipped or a handhold crumbled—not much, just enough to keep her hyperaware.

The sun crept toward its zenith, beating its rays on her back. She was sweating now, increasing the possibility of dehydration, but she didn’t want to stop for a water break. The top was the goal. Her focus.

Without re-chalking her hand, she reached with her left hand for the next handhold. Her fingers grasped it solidly.

Then they slid. Only a fraction of an inch, but enough to let her know she was in trouble. If she braced herself just right, she could recover.

Using all the strength she had, she shifted her weight back to where it had been, only to have her right foot, the one with the majority of her weight, slide down with a clatter of pebbles.

“Take!” she screamed to the ledge below.


“Who knew I’d care about rock-climbing or oil fields?! Yet I trust Casey Dawes’ stories to grab and sustain my curiosity. STARTING FOR HOME’s characters resemble people I know. The engaging plot points, which come from varying perspectives about their lives and America’s life, stimulated personal evaluations of what’s happening. Paragraphs on Montana landscape took me to the Big Sky land. Dawes gives us another page-turner. As the story closes, each character has grown but we know there’s more to come. I can hardly wait for the sequel, to learn what happens next.” ~ Susan Drake, author of Fields of Courage

” I love how I am immersed in these characters daily highs and lows as they are finding their path through this challenge, we call life.” ~ Mary Jo Toth