A chunk of the story, Christmas in Montana, that I just finished, takes place in a small Montana town–Phillipsburg, population 840. This past weekend, my DH and I swelled that population to close to 4,000. The occasion was the 2nd Annual Aber Day Kegger Reunion, a classic in the Montana music scene.

When I lived in Montana in the 1970s, the Mission Mountain Wood Band (M2WB) emerged on the scene. Along with a number of my fellow teachers, we listened to the music and played their one album, In Without Knockin’ over and over again. Times changed and lives moved on …

But over 30 years later, I returned to Montana and found the band was not only together, but as popular as ever. They’d even helped reinstate a popular mini-Woodstock event–the Aber Day Kegger.

William M. “Daddy” Aber was one of the original professors at the University of Montana, and, according to local lore, he was quite beloved. When the students and faculty of the university decided to raise money for library improvements, the name seemed like a natural to them. And a festival was born.

Students never did anything small in the 1970s. The festival cost $8. You received a pitcher to drink as much beer as you could, and from what we’ve heard, people did. Then there was the music. 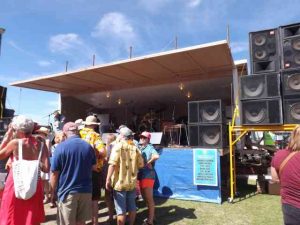 Back in the day, big names came to the kegger–Heart, Nitty Gritty Dirt Band, Bonnie Raitt (who I met once), and Jimmy Buffett (who I never did). Today, we have the same grounding act that existed back then–the Mission Mountain Wood Band.

And so life comes full circle. After 30 years, I finally got to see the band I’d enjoyed in the 1970s.

When another town needed to work on a library, they revived an old tradition. In 2015 the Rotary reincarnated the Aber Day Kegger in Phillipsburg. This year, M2WB was joined by the Mud Flaps, and Lil Smokies–a band to keep an eye on. I understand they even leave Montana.

And This Relates to Romance How?

Music is an integral part of our romantic life. One of the things that frustrates me as a writer is that I can’t use song lyrics in my stories. It’s important to respect the rights of original writers, but songwriters make obtaining the use of a few lines especially onerous. So, as a writer, I avoid the whole issue and use the song title.

They call it the soundtrack of our lives and it truly is. That’s why, after a long hiatus, I’m happy to hear the band live. Now, to figure out where to stick Athens County in a book so I can get the lyrics out of my head!