Book 2 of the Montana Christmas series. 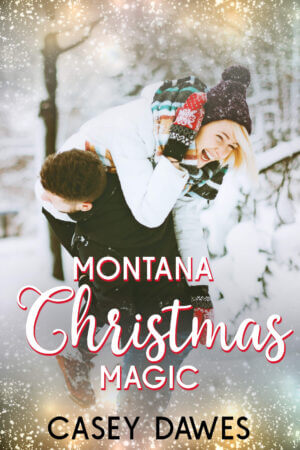 She’s a Montanan to the core. He’s a pro tennis player from New York City. Will a white Christmas have enough magic to open their hearts to love?

Julie Thompson has put everyone else’s needs first, but now that her friend’s chocolate shop is a success, it’s time to restart her art career. She loves Montana’s landscape and wants to recreate it on canvas. But she does one last favor and brings chocolates to a beloved customer’s funeral so he can take them with him to the great beyond. Her good deed isn’t appreciated by an attractive, but scowling, man on crutches.

A horrid crash left Logan Collins on crutches, derailing his pro tennis career. He’s retreated to his Uncle Willy’s ranch in wintry Montana to heal and get back on the circuit. But just days after his arrival, his uncle dies. His will leaves the ranch to Logan, along with a year’s supply of chocolate delivered by a woman Logan can’t forget.

Julie and Logan are attracted to each other, but their destinies are determined to pull them apart. The country woman doesn’t belong in the city, and the city man refuses to acknowledge the sweet life of the country. Will they follow the courses they’ve set for themselves? Or will Montana Christmas Magic guide them to a way to find sweeter lives surrounded by love?

Montana Christmas Magic is a sweet contemporary romance set in Montana. It is the second in the Montana Christmas series but can be read as a standalone. So get your hot chocolate ready, settle in your cozy chair by the fire, and start reading!

Julie Thompson rearranged the Easter chocolates for the fourth time that morning.

Something about it still didn’t suit her. Bunnies and flower cutouts lined the walls, and Sue Anne Deveraux, the store’s owner, had pronounced it charming.

But no matter how many cute pictures she put around the sweet shop, piles of snow still lined 3rd Street. Spring didn’t look like it was making any effort to show up soon.

She moved a caramel egg half an inch.

“Will you stop fussing?” Sue Anne entered from the hallway that separated the shop from her living quarters, coat in hand. “As soon as someone buys something, all your arranging will be for nothing.”

“Could be, but I need to use my art degree for something. It may as well be to make Sweets Montana look the best it can.”

“Whatever,” her friend and boss said, waving a hand and sending sparkles from her engagement ring in rainbows around the room.

“Have you set a date?” Julie wiped her hands on her apron and rearranged packages on the side shelf.

“I’ll be there. But I have some say in the dress.”

“Please. My gown isn’t even going to be in that style. Speaking of which, we need to make an appointment at Rococo’s to look at dresses.”

“Sure.” After marrying off four sisters, Julie was used to the drill. Her wedding day was a long way off, if ever. Tony, her boyfriend, was a nice enough guy, but she didn’t feel the spark her mother had always talked about.

“Where are you going?” she asked, moving the egg back where it had been.

“Zach and I are looking at invitations. Be back in an hour or so.” The doorbell jangled noisily as she left with a sway in her step that hadn’t been there before Zach had come along.

She grinned. The nine-year-old had been one of their staunchest supporters since Sweets Montana opened more than a year ago. He’d quickly made himself indispensable for outside work—shoveling, weeding, and carting around boxes as big as he was.

It didn’t hurt that he had a sweet tooth partial to chocolate.

“Cash or candy?” she asked.

“Money,” he said, his dimpled grin fading a bit. “We’re going camping this summer. I want a new fishing rod, and Mom says I have to save up half.”

Julie pulled the cash from the jar, and added in a few jellybeans.

“Awesome, Julie!” He stuffed the ones in his jeans pocket and the candy in his mouth, his full grin back on his face. “Fwnk u,” he mumbled as he sped back outside, almost knocking over a man with a cane as he opened the door to the shop.

“Sorry, mister!” Jaiden dodged around the man, whose gaze followed him. A slight smile played on his lips.

When he turned back, Julie steeled her expression. What had once been an aristocratically square-jawed face was marred by a series of scars on the right side of his cheek. His light brown hair was stylish in a way that announced, “Not from here.”

His classic blue eyes pinned her to the counter.

God, she wanted to paint him. Scars and all.

She had to find out everything about him. Why did he have a cane? The scars? Where was he from? Going?

Why had he walked into Sue Anne’s shop?

Bunnies and flowers couldn’t compare to the man in front of her.

Hopefully, the quivering mass of her insides wasn’t visible externally.

She’d never had this reaction to a man before.


“If you are at a crossroads in your life and need inspiration then this book is for you. Follow your heart and your dreams with an open mind! Don’t give up!”  ~ Long and Short Reviews

“What a wonderful holiday romance to put you in the mood for the season.”  ~ M.J. Toth, Vine Voice