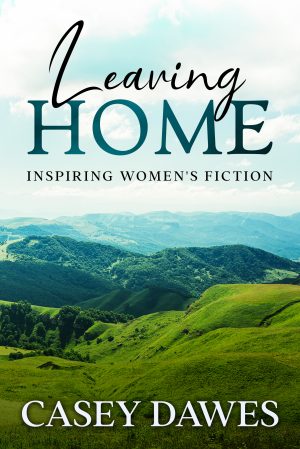 Megan Winkle does what any woman in pain would do … she runs.

Robbed of her future, she “steals” her Granny’s spinning wheel, stuffs it in a U-Haul with her other things, and heads west. When her car breaks down in Choteau, Montana, she stays. The scenery is amazing and people are friendly. The long winters give her plenty of time to spin, knit, and plan her new business.

As spring inches into the northwest, her business is off to a good start and two men want to take her out. Dave Brockman is a confident, well-heeled businessman; Dylan Beck a part-time rancher and unsuccessful artist. She likes them both, but she’s not into dating. First, she needs to stand on her own two feet.

Everything is running smoothly until the sheriff shows up on her doorstep to charge her for stealing the spinning wheel. Everything goes downhill from there. Should she reach out for help, or pack up and run again?

A woman’s fiction novel, Leaving Home examines the courage it takes to follow a dream no matter what happens. The intimacy of small-town life, the soothing nature of the fiber arts, and vivid descriptions of life on the Rocky Mountain Front live within its pages. (There is also a knitting pattern!)

The March wind hurtled down from Canada, blew south along the Rockies, and howled across the plains to the east. Not the best day to go to the airport and pick up his brother.

But then, the wind never really stopped. Living on the Rocky Mountain Front meant putting up with it. In return, the resident had an abundance of clear skies, majestic mountain views, and unexpected weather.

Dylan Beck checked the time on his phone for about the tenth time as he poured himself a cup of coffee from the ever-going pot in the ranch kitchen. He had to leave for the airport in about fifteen minutes, giving himself plenty of time to get to Great Falls, park, and find the right gate. Not that it would be a big problem in the small airport with only handful of planes landing at any one time.

Except so many things could go wrong—a flat tire, semi blown over by the wind, a bunch of cattle who’d escaped their enclosure, wandering over the road. He should leave now. No way was his wounded brother going to arrive at the airport with no one to great him.

“When is Cameron coming in?” Dylan’s brother Jarod asked as he entered the kitchen.

“His text message said he left from Dulles at nine Eastern Standard Time, which put him into Denver at eleven their time. He had a two-hour layover and thinks he should be in Great Falls by three or four at the latest.” He held up his phone. “I’m tracking the plane, and so far it’s right on time. But I need to leave soon.”

“You and your gadgets,” Jarod grumbled as he poured his own cup of brew.

“I was right about the drone,” Dylan said.

“Someday you’ll need to move beyond the twentieth century.”

“Now that you finally got the girl.” Dylan glanced at his phone, then poured his coffee into a travel mug.

Dylan shook his head. “She thought it would be better if only one of us met Cameron so he didn’t feel ganged up on. She also said a brother would be easier for Cameron to deal with than an older sister.”

Jarod slumped into a chair, his legs splayed beneath the table. “I wish it had turned out differently. Cameron’s such an outdoor guy. Losing a limb is going to hamper that big time.” He looked up at Dylan. “What are we supposed to do? To say? What is he going to do?”

“They’ve got some amazing technology today. He’s not the only one coming back from a war zone with a major injury. In some ways, we should be thankful it’s only a limb. The military is having some success getting those soldiers functioning again. Brain injuries and mental problems are a whole ‘nother animal.”

“I’m not sure that’s not going on with Cameron.” Jarod sipped his coffee.

Unease tensed Dylan’s muscles. Jarod was right. Since he’d been wounded in a bomb explosion several months ago, Cameron hadn’t wanted to talk to anyone. After he was airlifted to a military hospital in Germany, CJ, the only one of them who had the cash, the time, and the passport, had offered to go over and stay with him until he returned stateside. He’d turned her down flat. Nor had he wanted anyone to visit him when he was going through physical therapy in D.C.

“Fixing up the master bedroom for Cameron.”

“Birdie thinks it will be easier on him. He had a lot of internal injuries from the bomb detonation, too.”

Dylan opened the mudroom door. “I’m sure we can figure out something to keep everyone’s ego intact.” He shrugged. “Maybe we’ve got it all wrong. Maybe he’s fine with it all and ready to move on.”

“I thought you were the religious one. Say a prayer and go feed the cattle. I’ll be back in a few hours. We can’t really figure out what’s up until we get him home.”

Dylan nodded and went into the small room off the kitchen where a freezer hummed in a corner. The washer and dryer took up one wall; the other was covered with coats, hats, and other warm weather gear draped over pegs and looming over a pile of shoes and boots on the floor.

He zipped up his coat and tugged on his gloves, leaving his longish hair to warm his ears. Birdie’d been after him to get a haircut, but he kept putting her off. Summer would be soon enough.

Dylan put the ranch truck in gear and climbed the drive to the main highway. Turning left, he headed the short distance to Choteau, took the rotary partway around the courthouse, and headed out on the road to Great Falls. Next to the market, a new shop caught his eye: Waldron Creek Cheese and Pastry Shop.

Odd combination. It looked pretty upscale for a small town in the middle of nowhere, but the area was changing. The internet made living almost anywhere feasible. New people were moving in, attracted by small-town living and the awesome scenery. Plus, well-heeled tourists and retirees continued to pass through on the way to Glacier National Park. If the town could support a niche store like this, maybe someone would finally start a gallery where he could sell his paintings … if he could sell his paintings.

He’d worn out his welcome at the Great Falls’s venues when none of his art sold after a year. The sale of a painting last fall, which allowed him to get a commercial-sized drone for the ranch, had kept him in one gallery in Helena. But as each month passed without a subsequent sale, his spirits sank, in spite of the fact most high-end stores were slow in the winter season unless they happen to have a ski resort nearby, like toney Whitefish or the Big Sky Resort near Bozeman. Maybe those were places he should try to sell his paintings. He smiled. It might work. He had to try something different.

The road descended into the Freezeout Lake area. Migratory birds were starting to increase on the open water, harbingers of the great avian streams heading north every spring. Huge flocks of white geese stopped at Freezeout twice a year, providing a cacophony of harsh honks and a blur of fluttering wings as they took off in the morning to feed at nearby fields and returned at night to rest.

There was nothing better than the sights of nature to heal a person’s soul. It had worked on CJ; there was a good chance the earth’s rhythms could repair his younger brother, too.

Dylan followed the road’s gentle curve as it passed the various ponds that made up the refuge. The overhead sky was gray, but not the deep hue that threatened snow, although the wind nudged the pickup with gentle bursts. The solid old truck didn’t budge from its path.

Was his dream of being a painter unrealistic? His mother had dabbled with paint for a long time, but constant critiques—solid technique, but not unique—had finally forced her to stuff everything in a box and give it away. He should probably do the same thing.

But if he gave it up, who would he be? With his other four siblings firmly planted in careers, his lack of success stood out more and more. He was unsettled, drifting like an unmoored boat. At the ranch, he was second fiddle to Jarod. In the art world, he was nobody at all.

The road deposited him at the edge of Vaughn, and soon he was on the interstate going to the airport. Time to put away his own internal angst. His brother needed him, and family was the most important thing of all.

“Wonderfully fantastic… The book was amazing… It had a lot of details and juicy scenes to it… The characters and their personalities match them perfectly… The plot and the storyline was very descriptive and amazing…!” ~ K. Bradbury

“I love the slow burn for this couple as they both work to find and pursue their passions.” ~ Mary Jo T.