Living on the road requires going to the laundromat every few weeks. It’s convenient when the facilities are at the RV park, but we are often places where it’s necessary to unearth a laundromat and go there.

Laundromats are great equalizers, like the military once was. And it’s a great place to observe.

Throw in the laundry and sit on the bench.

Not the one Arlo made famous.

But the one outside where the cacophony of whirling machines

And reality television are lower.

The man carrying T-shirts on hangers—

One is a bright tie-dye—

Gets into a Prius.

A cream-colored Caddy crawls onto the lot.

Brightens with a smile.

Informing us of something we have already understood.

“But it’s the dew point. Dew point is too high.”

He shakes his head as he unlocks his bike.

“Wouldn’t be so hot if it wasn’t for the dew point.”

He rides off with a wave.

Slowly, a tall black man unfolds from the Caddy. 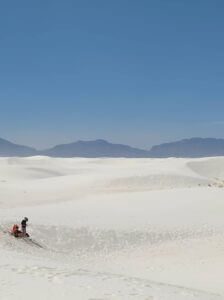