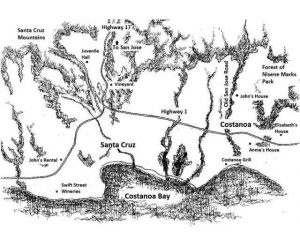 Costanoa is a fictional town on the Central Coast of California roughly based on the towns of Aptos and Capitola. (Click on map to see larger version.)

The Blackbird: A small French cafe that is very popular with the residents of Costanoa–especially for ladies who lunch or to take a new beau.  Modeled after Cafe Sparrow.

Café California: Located near Rio del Mar, Rick and Sarah have lunch here, although the cafe is never named. Mandy and James have their first real date at the cafe based on Cafe Rio.

Cellar Door Cafe: A modern cafe hidden behind huge redwood barrels, this cafe is the perfect accompaniment to a day of tasting great Santa Cruz Mountain wines…or before a folk concert.  The actual restaurant has closed.

Costanoa Farmer’s Market: Mandy goes to the market with her boss, Sally Minor. The experience, loosely based on the Aptos Market, is described in California Thyme.

Costanoa Grill:  Elizabeth and Annie like to hang out here — particularly in the wintertime when it’s not too crowded. Mandy is a waitress at the grill. The food is yummy and the wine list has lots of Santa Cruz Mountain wines. If this sounds good to you, try the Paradise Beach Grill in Capitola Village, California.

Crystal Visions: In the mood for a psychic reading?  Check out Avalon Visions in Capitola.

Davenport Roadhouse: About ten miles north of Santa Cruz lies Davenport, a small town on the coast worth a stop if you’re traveling the Pacific Coast Highway. Mandy and James have their first lunch (not a date!) at Davenport Roadhouse.

Don Quixote’s in Felton is a great place for Mexican food and all kinds of concerts!  In the neighborhood, If you’re in the area, stop by Flynn’s Caberet and Steakhouse (formerly Don Quixote’s) after a walk in Henry Cowell.

Elkhorn Slough National Estuarine Research Reserve is a long name for a fabulous birding area near Moss Landing on the Monterey Bay. It’s one of Sarah’s favorite places. Learn the history and natural attractions of the Elkhorn Slough. She also loves to share otter and seal spotting with the Elkhorn Slough Safari Nature Boat Tours.

Gayle’s: THE bakery and rosticceria  in Capitola, it’s crowded for breakfast and lunch and packed right before dinner with people getting take-out.  You know when a place is crowded, it’s got to be good.  Hunter, the hero in California Homecoming, enjoys stopping by Gayle’s, and Sally from California Thyme swears no one makes a better olallieberry pie.

Grenaldi’s Market: Walking into this market makes your mouth water. Almost every type of natural food is available and the deli is a great place for lunch — and maybe meet the man of your dreams. When in Santa Cruz, stop by Staff of Life and experience it for yourself!

Jade Alley: Tucked away in a little alley in Santa Cruz is a treasury of California cooking. A great place to take a special someone for a date.  Unfortunately, Pearl Alley Bistro which was the basis of this charming little restaurant is closed.

Michael’s on Main: Michael is a great supporter of the wines of the Santa Cruz Mountains and many events are held at this unique restaurant on the bank of the Soquel River.  Enjoy a tasty lunch and don’t forget the sweet potato fries at Michael’s.

Ocean Reads: Good independent bookstores are a treasure and Santa Cruz has one of the best.  John Johnson, the new owner, is keeping it stocked with eclectic titles. Great opportunities to meet your favorite authors.  Stop by the inspiration — Bookshop Santa Cruz!

Passionfish: A stellar restaurant in Pacific Grove by Monterey. Mandy and James enjoy their crab cakes and tipalia at Passionfish.

Pizza: Everyone likes pizza and the residents of Costanoa are no exception.  The natives flock to Pizza My Heart and you should, too!

Silver Spur: The Silver Spur in Soquel is a great place for breakfast. John likes to breakfast there before taking a ride on his horse. Beware of the long lines!

St. Andrews Episcopal: John Johnson finds himself bewildered in this church after his Lutheran upbringing.  But the congregation is friendly and welcoming.  Find out for yourself at St. John’s Episcopal in Aptos.

Surf City Vintners: The people of Costanoa enjoy their wine!  The shops and wineries in the Swift Street area are buzzing–especially in the summertime.  Join them for some fun at Surf City Vintners!