A Novella in the Rocky Mountain Front Series 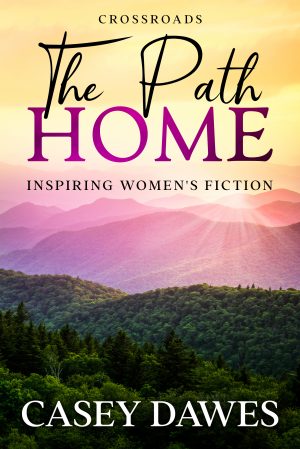 Will secrets destroy their marriage?

Trish and Brad have been together since high school. Their son is about to go to college. And their marriage has fallen flat on its face. Could a little flirtation put the juice back into marriage? She’d read somewhere that more and more women were looking for satisfaction elsewhere to help them stay in their relationship.

When she walks into the new bakery in the next town over she thinks she’s found the perfect person. The bakery owner is from Montreal, French down to his little toes.

But things are never as easy as magazines make them. Is she really willing to risk the life that she vowed to live forever when she showed up at the alter two decades ago? Can she play around and still keep her self-respect? Or will it all fall apart?

Crossroads is not available in any stores, but you can get your FREE copy by clicking this link.

When the man behind the pastry case looked up, Trish stopped walking.

All at once, she understood what people meant when they said, “It just happened.”

His dark eyes, framed by thick lashes, seemed to see everything she was in an instant. But it was when he smiled at her like she was the answer to every prayer he’d ever had that her heart stopped beating for a second.

“Hello,” he said in a voice accented with what could only be French.

Of course. The hick from Montana falls for the sophistication of the continent.

She pulled herself back together. She was a married woman after all, nearly twenty years so. This was a business meeting, nothing more.

Squaring her shoulders, she strode forward, the white box she carried firm in her hand. “I’m Trish Small,” she said as she reached the case. “I called you earlier this week to set up a time to talk about our businesses working together.”

“Ah … yes, yes, yes. I see. One moment.” He wiped his hands on his apron, then quickly ran them under the water from the faucet of an industrial sink on the wall behind the counter. Once his hands were dried, he turned back to her. The smile was back, but the intimacy of it was gone.

“Can I give you a cup of espresso,” he asked. “It is about time for me to have another so it is no problem. And perhaps a croissant?”

She hesitated. She’d been on a diet for months, afraid that the ten pounds she’d put on in the last year might be the reason her husband was keeping his distance.

“It is a very good croissant.” The smile was back.

“Bien.” He busied himself behind the counter.

While she waited she took in the place, trying to avoid looking at him, his efficient movements adding to what seemed to be a natural grace.

The pastry shop was clean and unpretentious, not resembling a French café, but still eliciting the same kind of feeling—the space in time and place to relax and spend a few guilt-free moments to relax, alone or with friends, and enjoy the savory tastes of life. A few of the perpetual knots at the base of her neck softened.

“Let us sit here,” Georges said, easily balancing hot cups of coffee and a plate with two croissants as he walked to one of the small tables near a window. Once they were settled, Trish placed her white box on it. “Ah, yes, the pie lady of Teton County. You are quite famous, you know. And what have you brought for us?”

“They are for you,” she said, nudging the box closer to his side. “Samples. A portion of a blueberry-cream cheese pie, and blueberry and cherry tarts. The fruits are in season now, and these are my customer’s favorites.”

“I … well …” What was the answer to that? The real one, that once her kids were in school and Brad was head down in his new business, she’d been at loose ends? That it was her passion—which wasn’t quite true? She loved baking and the enjoyment her sweets brought people, and she was good at it, but it was more that it was something she felt capable of accomplishing.

“What part of France are you from?” she countered.

“Oh, I am not from France at all. I am from Montreal.”

“How in the world did you end up in Montana? And Augusta of all places?” Although she’d never been there, her images of Montreal were of city, sophistication, and sensuality.

“The French have long come to this part of the world. Once of my ancestors was a trapper in this area in the 1800s. And even your own town, Choteau, is named for a Frenchman, is it not?”

“So there you have it.” He splayed his hands and gazed at her plate. “You must feel a great need to torture someone, as you are doing to my poor croissant.”

She looked down at her plate. The pastry had been torn to pieces. Plucking one, she popped it into her mouth. “It is delicious,” she pronounced after she swallowed.

“I see. Well, since you do not want to talk about why you make pies, and I have no need to discuss myself, let me sample your gift.”

After fetching a new plate, pie knife, and two forks from behind the counter, he opened the box and placed the wedge of pie on the plate. He sliced it in half and handed her a fork.

He shook his head. “Food is to be shared, enjoyed together. Otherwise it is merely sustenance.”

She took the fork.

He took a piece and placed it in his mouth, between those beautiful lips.

What would it feel like to have them on her own?


“I found this book intriguing. It puts a different spin on why some people may consider having an affair. It was easy to see Trish’s point of view and her dilemma. It’s a good read.” ~ BJVP