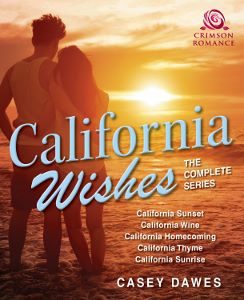 My California Romance series was complete with California Sunrise. Last month, Crimson Romance let me know they were issuing the full series (five books) in it’s own bundle. I’m really excited for this event! The first four have been available in California Dreaming for almost a year. That anthology will be pulled when California Wishes comes out.

The first bundle has done well, and I hope to discover new readers with this anthology, which tells the stories of friends, mothers and daughters, half sisters, and the people who love them. The stories take place on the Central California Coast, an area I called home from 1996 to 2011. Locals who have read the books are excited with the authentic descriptions of the area.

The books are close to my heart, and there’s a lot of myself in them.

The first book belongs to Annie, who must make a choice between being laid off from her tech job or moving across the country with her teenage son to begin work in another division of the same company. In 2005 I was laid off from my job at IBM. Her son gets in trouble with the law–a situation I’m unfortunately too familiar with. I could describe Santa Cruz County Juvenile Hall with searing accuracy.

The second book is about Annie’s friend, Elizabeth, who falls in love with an Italian winemaker. When we were courting, my husband and I wrote a book called Mountain Vines, Mountain Wines, a snapshot of the winemakers in the Santa Cruz Mountains AVA in 2002-3. We met a lot of great people, learned far too much about wine, and drank well! Some of those winemakers make cameo appearances in this book.

The third book stars Elizabeth’s daughter, Sarah. I wanted to write something in tribute to the veterans who have protected our freedoms and sacrificed way too much for our country. Hunter fights his way back to health and sanity, winning Sarah’s heart on the way.

In California I knew a lovely creative lady who developed a farm to table exploration service. She took small groups and invited farmers to show their wares and serve associated food. It was very popular, but unfortunately Kaycee MacKenzie died too young. She did however, give me the title for the fourth book: California Thyme, the story of a young caterer who needs to resolve her relationship with Hollywood, home of her parents’ ill-fated marriage and careers.

Out of the Fields introduced me to Ramon Resa, MD. Actually, my friend Susan Samuels Drake, author of Fields of Courage and former secretary to Cesar Chavez introduced me to Ramon. His story was so real and courageous, that it was a natural fit for Sarah’s half-sister, Alicia, mother to a child on the autistic spectrum.

I invite you to sit in the sand by the ocean and lose yourself in the lives and loves of those who live along the California coast.

“I loved these four stories with the setting in California because I was familiar with the area. Creative story line. Enjoyable reading.” ~ C. Mayoral about California Dreaming.

Nanowrimo: Christmas Romance 2017
The Power of Writing
Romance in the Kitchen