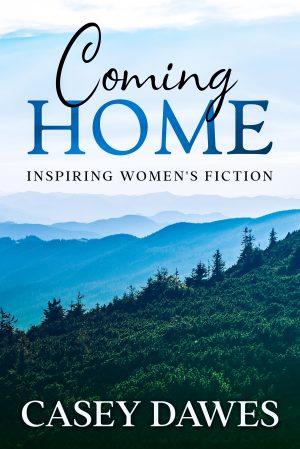 Veteran Jen Lopez’s latest fight might be her toughest.

For Jen the Nature Fund in Montana is a chance to readjust to civilian life. But she doesn’t feel like she fits in, especially when a fellow employee takes every opportunity to snipe at her. Is he threatened by her gender, ex-military status, the color of her skin, or all of the above?

Ignoring his negativity, she initiates the idea of running a fishing program for disabled vets. If she succeeds, she’ll have more standing in the organization and can do more of the fieldwork she craves. But like much in life, things don’t go exactly as planned.

First, she has to stand in front of her fellow soldiers, many who’d been in more senior positions, and act like she’s in charge. Second, there is her annoying attraction to Cameron Beck, in spite of her vow never to get involved with another vet. Then there is her concern for one of the men who seems to be losing the battle long after he left the war.

Will she be able to survive the swirling waters around her? Or will the current pull her back into the perceived safety of the military life?

A woman’s fiction novel based on real events, Coming Home examines the phenomenal strength it takes for our military veterans to come to terms with civilian life.

Jen Lopez looked at her watch again. What was it with civilians? Couldn’t they get anywhere on time? She popped a piece of gum in her mouth to still the chatter in her head. There was no point in trying to change the culture of the Nature Fund. She was just going to have to get used to it.

Picking up her phone, she reread the message she’d received from Project Healing Waters. They were extremely interested in working with the Nature Fund on a fishing event for vets. Now all she had to do was convince the powers that be that it was the right thing to do. That and find a fishing group, like Trout Unlimited, to be the third partner for the project.

Not insurmountable, but she’d only been in the Montana for a month, so she was still trying to figure out the major environmental players. There were a lot of them. It seemed like every corner of the state was important to some group or another.

It was nothing like the military or her parents’ home in Middletown, New York.

Dan Morgan, the director of the Montana chapter of the Nature Fund, came into the room. He was a tall man, broad-shouldered and deeply-tanned from the summer’s work outdoors.

“Everyone late again?” he asked.

“Appears to be,” she replied.

“It’s normal,” he said with a smile. “They get their minds focused on something and lose all track of time.”

Maybe she was being too harsh.

“I’m just as happy that I have a little time with you. How are you doing? I mean are you adjusting okay? It’s got to be tough.”

“I can handle it.” She’d learned that lesson in the military. Never show weakness. Guys would eat a weak woman alive. It had happened to a recruit who entered the same time she had, a small blond woman from Delaware. She’d screamed the first time a lizard ran across her boot and the hazing started immediately: snakes in her bed, insects dropped down the back and front of her uniform.

“I’m sure you can. We wouldn’t have hired you otherwise.” He looked down at his hands, which were clasped calmly in front of him. “But I want to make sure you know you can come talk to me about anything. This isn’t the military—“

“I’ve noticed.” Her voice was more strident than she’d intended.

His hazel eyes glanced sharply at her.

“No problem.” The strained silence was interrupted by the arrival of Amy Cooper, the organization’s event manager, who’d be a key person if Jen’s project was approved.

Jen smiled at her, trying to make sure Dan saw it. He didn’t need to be thinking she wasn’t a team player.

“Hi,” Amy said, looking around. “I guess I’m not that late.” She sat across from Jen and began to spread her things across the table in front of her, tablet with keyboard, phone, date book, sketchpad, notepad, as well as pens and pencils in varying degrees of sharpness and color. When she was done, she smoothed back her light brown hair and gazed at Dan with the warm smile she reserved only for him.

Jen still hadn’t decided whether Amy liked Dan as a man or was just sucking up to him as a boss. Civilians were hard to decipher.

The last two of the invitees, the guy in charge of external affairs and the finance guy, came into the room at the same time, obviously carrying on a discussion they’d been having for some time.

“Looks like we can begin,” Dan said. “Jen, can you tell us about the program you’re proposing.” He glanced around the room. “It’s innovative and involves a community we don’t serve well, exactly the kind of thinking we need in this office.”

Jen straightened her spine, embarrassed, yet pleased at the unexpected compliment. “What I’m proposing is a partnership with Project Healing Waters Fly Fishing, a group that supports programs that help veterans learn to fly-fish. The program would help Montana’s disabled veterans’ rehabilitation through fly-fishing. There are two benefits to this organization. The first is supporting an underserved group of people and help them become engaged with nature, and the second is to get these people involved in supporting the organization financially, as employees, and as volunteers.” She ticked her final three points off on her fingers.

Then she waited for the inevitable skepticism.

“And just how are disabled veterans supposed to fly-fish?” Gary, the finance guy asked. “Are we supposed to wheel them out to the stream or something?”

“I think it sounds wonderful,” Amy said. “My cousin loved to be outdoors, but since he’s come back from the war, he’s barely left the house. He’s not really disabled physically, a few battle wounds, but he seems angry all the time, my aunt says.”

“There are adaptive devices that injured vets can use to fish,” Jen said. “They are also taught to do it without if that’s their choice. They learn to use their mouths or adapt with one hand. The guy I spoke with said the things they learn during these fishing trips helps them adapt to the rest of their lives.”

“It’s not as expensive as it sounds. The vets have to get to the site—or the closest airport–on their own, then we take it from there.”

“What if someone can’t afford to come, but wants to?” Amy asked.

“I suppose we can look into some type of scholarship to help them,” Jen replied, making a note on her phone.

“How is this going to help our mission?” Steve, the director of external affairs, asked.

“In a few ways,” Jen patiently explained, even though she’d been over this territory with him a few times before. “The first is that we are letting veterans know about our organization. Most haven’t ever heard of it. Second, vets make terrific employees—they’re loyal, hard-working, and disciplined.”

“And you don’t think non-vets are that way?” Gary accused.

She ignored him. The man had been a real pain in the butt ever since she’d gotten to Helena. Was it because he didn’t like veterans? Women? She glanced around the table at the four white faces. Or was it because she was the only person of color in the entire office?

“Plus,” she continued. “It’s great publicity. We’re helping vets who need it. The military is a fairly conservative organization. Environmental organizations are seen as liberal.” She raised her hand to forestall any objections from Gary, who’d already opened his mouth. “I know Nature Fund is dedicated to both people and nature and strives to be bi-partisan, but the world doesn’t always see it that.” She vigorously chewed on her gum, a habit she’d picked up in the arid desert that seemed equally appropriate in the dry air of Montana.

“I think it’s a great idea,” Amy added, giving Jen a large smile of support. The woman had always been kind to Jen, going out of her way to ask her to come to coffee with her now and then.

Jen had always refused. The job was too new, and she wasn’t totally sure it would work out. Maybe she was being foolish, though. Having an ally wouldn’t hurt. She didn’t need anything more than that.

“Whatever,” Gary said. “I’ll crunch some numbers to see how much it’s going to cost. Since it won’t be an income producing event, it’s going to need to come out of someone’s budget which means there will be less money for our core mission.”

“Everyone’s agreed then,” Dan said. “Jen, would you get together with Amy and create a project plan and timeline?”

He smiled, then leaned back. “I guess that’s it then. Thank you all. Jen, would you hang back for a moment?”

“I just wanted to tell you not to let Gary get under your skin. He can be difficult, but he’s dedicated to the organization and excellent at managing our funds effectively.”

“And you don’t have to call me sir,” he added with a grin. “It makes me feel like there’s a wall between us which will make it harder to get to know you. And you’re someone I’d like to get to know,” he added, his hazel eyes lingering on hers.

Her antenna went up. Was he implying something more than a professional relationship? If so, it was a bad idea. Getting involved with a civilian wasn’t a good idea. She’d heard countless horror stories.

Actually, getting involved with anyone was a bad idea.


“Jen and Cameron meet that weekend. Both carry a lot of doubt, confusion, insecurity as they try to navigate life without the military structure. I have a new appreciation for veterans, I truly enjoyed how honest and thoughtful this story handled the challenges involved with shifting from military life to a civilian world can be. There are wonderful layers to this story for each of them.” ~ Mary Jo T.

“The plot is smooth and engaging and, as always, gets us ready for the next book in the series.” ~ BJVP