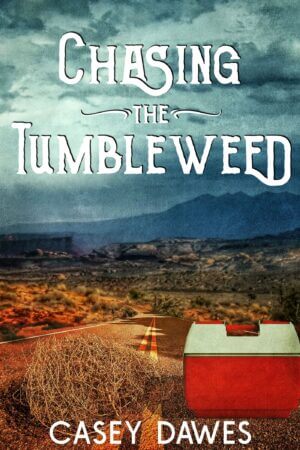 Opening an abandoned ice chest on a lonely Nevada highway might be her worst decision yet.

According to her former boyfriend in Salt Lake City, Laurie Bevin isn’t good at anything. With her meager possessions and newly minted degree in American History, she puts her pride in the trunk of her aging Celica and heads home. Not eager to admit failure to her successful LA parents, she takes the back roads through Nevada. Her curiosity leads to a carjacking … and possibly worse.

Forest ranger Jeff Dawson is dedicated to the only thing in his life for the past eight years—his job. The isolated stretches of the Humboldt-Toiyabe National Forest suit him just fine. Except today there’s a killer loose in the region he guards. No matter what, he plans to set things to right.

Faced with a madman who will stop at nothing to get what he wants, Laurie needs to call on all her inner resources if help doesn’t get to her in time. Will Jeff be able to outsmart the killer, or will he become a victim, too?

Chasing the Tumbleweed is a very short suspense story with an undercurrent of romance. If you like Western suspense with a woman in danger who must help save herself, you’ll enjoy this book.

The hot August wind tossed tumbleweeds across the two-lane highway. Laurie Bevin eased off the gas to avoid the rootless bushes, though even that small movement increased the pressure in her bladder. There had to be a rest stop. The barren Nevada countryside didn’t have decent shrubbery to hide behind to do her business.

Bleak. How did anyone live here? Or did they? All she saw were suggestions of roads that led to higher ground or disappeared into a white-caked alkaline bog.

What had possessed her to take this road? The interstate would have gotten her from Salt Lake to LA faster than wandering through the heart of basin and range country.

But that was the problem. Moving faster meant pulling up at her parents’ door sooner than she had to and confessing her failure at the ripe old age of twenty-four.

There! Black pipes rose from two squat non-descript buildings that blended in with the rest of the brown landscape. Only the gray thunderclouds to the east provided relief from the unrelenting earth tones.

She drove her ancient Celica onto the dirt parking lot and pulled to a stop. As she got out of the car she noticed a bright red plastic ice chest positioned exactly between the two buildings.

Holding her nose, she ran into the brick outhouse, using every ounce of willpower to keep from peeing in her pants. She sighed with relief when she finished and stood to zip up her jeans.

Something rustled behind the building.

Probably some form of rodent. Time to get out of here.

She glanced around the small space. Not even a hand sanitizer.

Turning the doorknob with distaste, she tried not to think of who or what lingered on its cool metal surface. She scurried back to her car, giving the ice chest another glance.
She’d be better off not knowing what was in it.

The disinfectant wipes she pulled from the glove box left her hands with a medicinal smell, but it was a vast improvement over lingering germs. Laurie gave another glance at the ice chest.

No good could come from opening it, but if she didn’t, her unfulfilled curiosity would haunt her for the rest of the trip. She pulled out another wipe to protect her fingers, walked slowly back to the chest, and circled it as if it was a snake. Finally, she lunged toward it and yanked it open.

She had one more motel night before she made it home. May as well take one.

Cautiously moving the top few aside to consider her options, her wipe-wrapped fingers touched metal. She whipped her hand back, dropped the lid and stood, the white square fluttering to the ground, stark against the gritty concrete.

She should get back in her car and head south.

She picked up the wipe, lifted the lid again and moved the rest of the books aside. A Bowie knife. From the looks of it, an antique full of rust spots. Gingerly, she removed it from the ice chest to look closer.

Gravel crunched on the side of the building.

“A little lady like you shouldn’t be holding such a big knife.” The voice was bland.

Pasty hands unwrapped her fingers from the knife and took it from her.

A middle-aged man stood in front of her, the stained cowboy hat on his head matching the rest of the outfit: faded Western-style snap shirt, dirty jeans, and scruffy cowboy boots, but the clothing didn’t suit his pale skin and middle-aged flab.

His smile chilled her spine in spite of the hundred degree temperature.

Buy this romantic suspense short story on Amazon or other online retailers.