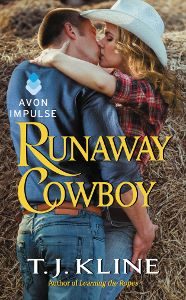 ”You had your chance, and you threw it away…“

Five years ago, Jen woke up with a ring on her finger and her fiancé nowhere to be found. She swore she’d gotten over the betrayal, but when Clay unexpectedly hires on with the rodeo for a week, she finds herself torn between passion and regret.

Clay left intending never to see Jen again. He’s been running from his troubled past for far too long, and it’s not a life he wants for her. But it’s hard to run from the past when the past is your own family, and Clay finds himself thrown back into the chaos he thought he’d finally left behind.

Will the truth drive Jen away, or is there a second chance at happily ever after for this runaway cowboy?

Close your eyes for a moment and imagine, if you would, what it must be like to be a writer. Not just someone who writes but a real writer, where you get a check for what your imagination conjures and people want your autograph. Breathe deeply and feel what it’s like when someone says, “Oh, I love that book!” and you can claim it as your own. Ahhhh…the joy, the admiration, the sheer pride that floods your soul.

Now, open your eyes and recognize that all of what you imagined was as much a fantasy as the fiction an author writes.

I have tried to find even one author who doesn’t suffer from the “I’m a terrible writer. Well, I’m okay, I think. No, I’m awful” audio track that plays in our head, on repeat, and I have yet to find even one. It doesn’t matter what level the author is writing at. They can be self-published, traditionally published, best seller or first time author – we all suffer from this self-doubt regardless of the adoration and assurance of others.

I could try to explain it another way but, in reality, we are the masters of the universe we create in our heads. Sure, there are certain “laws” we must abide (unless we are sci-fi or fantasy writers, in which case, there are no laws but those we establish) but for the most part, it’s our world and our circumstances to control.

As writers, we care deeply about our readers. We want to know they “got it” and our story affected them to their core. In the same breath, a bad review will have a seasoned writer shrugging and moving on as if it doesn’t matter at all.  We know that no one book will every please everyone and we must simply continue to strive to be true to the story which, in turn, we hope some reader loves.

4.    We stress over things we can’t control and procrastinate what we can.

Writers spend far too much time thinking about things like reviews, best seller lists (and how to get on them) as well as how to find more readers, reviewers and exposure instead of writing. While all of these things are important and factor into the longevity of a writing career, without the actual physical writing, none of those things matter in the slightest. Until you have something to give to those readers, hand to reviewers or books to show up on best seller lists, it’s all wasted energy. Who cares how your signature looks in a book cover if you don’t have a book worth writing it in?

5.    We can’t distance ourselves from our work.

The story an author pens is a piece of their psyche, a portion of their emotions, heart and soul, laid out on the page for the reader. We are fragile, contradictory creatures bent on torturing ourselves with an internal editor from hell and an internal reader who loves every draft. Somehow we try to balance between the two while maintaining some semblance of sanity.
Now close your eyes again. What do you imagine this time? A host of voices, hundreds of characters begging for their story to be written next? A crowd gathering with pitchforks and lanterns, bent on slaughtering you for writing the worst prose humanity has seen. Open your eyes and know that the life and mind of a writer is somewhere between these two extremes.

Clay grabbed her arm, and she spun on him, wildly swinging her purse at his head and jerking her arm from his grasp. “Don’t touch me.”

He easily caught the purse in his hand and dropped it at his feet as he pulled her into his arms.

“What do you have in that thing? Bricks?”

“Let go of me, Clay,” she said through gritted teeth, twisting, trying to release herself from his grasp.

“Only if you let me explain.”

Every inch of her that was in contact with him burned with icy flames. The heat of his hands on her arms sent warmth running down her spine to melt her limbs and ignite the desire pooling in her belly. She wanted to push him away, to run to her trailer and stay there until he went back to wherever he’d been hiding, but when her eyes met his, pleading with her to listen to him, she couldn’t deny herself just one more moment with him. How was she supposed to keep hating him when her body wouldn’t follow her commands?

“You have five minutes.” One for each year she hadn’t heard from him. He released her cautiously.

She walked back to the truck, knowing he would follow, and flipped the tailgate down. She hopped up on it, letting her legs dangle. When he sighed and scrubbed a hand over his jaw, she quirked a brow. “Time’s ticking Clay. Start talking.”

“You know, for someone who seems to think she has everything figured out better than the rest of us, you sure can be irresponsible. What were you thinking going into that bar?”

Jen almost let her mouth fall open at the audacity of his accusation. She bit the inside of her cheek until the metallic taste of blood forced her to stop.

She jumped from the back of the truck. “That was some explanation. I can’t believe I waited this long for it.”

Clay’s fingers circled her wrist as she started to walk away. “I have at least three minutes left.”

He pulled her back toward him, drawing her against his chest as one arm circled around her waist. His other hand buried into her long hair, and she gasped in surprise as his mouth found hers. Her body betrayed her again, melting against him as her bones seemed to turn to molten lava. Her fingers dug into the muscles of his shoulders, but she wasn’t sure if it was to keep her balance or because she couldn’t resist touching him. His mouth was gentle, in spite of their argument, as if he wanted to savor this kiss, to taste her, to force the memories of the tenderness they’d once shared to the surface. Clay nipped at her lower lip, testing her resolve, and when she didn’t protest, he plunged ahead. His tongue swept against hers as she slid her hands over his shoulders before curling her fingers around the nape of his neck, twining into his hair.

Clay’s lips trailed over her cheek and jaw. “I’ve missed you, Jen. You have no idea how much.”

T. J. Kline was raised competing in rodeos and rodeo queen competitions since the age of 14, She has thorough knowledge of the sport as well as the culture involved. She has had several articles about rodeo published in the past in small periodicals as well as a more recent how-to article for RevWriter. She is also an avid reader and book reviewer for both Tyndale and Multnomah.