As I begin my search for an agent, I’ve noticed a trend…many agents are looking for manuscripts where the heroine is strong, maybe a little bad, and definitely has an attitude. They are looking for bad-girl heroines.

I have to admit, my heroines have been strong, but usually take the entire book to get the attitude. Why this focus on attitude all of a sudden?

Like most trends, this one didn’t develop overnight. Goodreads has a list going back several years with bad-girl heroines. These are women who are criminals, live outside the socially acceptable line (particularly in historical romance), or take risks generally frowned on in polite society. They don’t take lip from anyone, and heaven help any guy who tries to force them back into the kitchen.

Bad-girl heroines are often tattoed, pierced, and sexually adventuresome. They may try to turn over a new leaf, but fail as their natural soul asserts itself. They provide quite a contrast to the women who is an innocent saved by the billionaire.

It think they are popular because they have a very visible spine. Not to say that other heroines don’t–it’s just not so “in your face.”

As readers we can fantasize being that audacious–without ever wondering what our mother would think.

A trend, especially a trend that is out of a writer’s comfort zone, can be tantalizing to a writer. Could I actually write a heroine like that?

Don’t get me wrong–I’ve had my “bad” moments and think about getting a tattoo in a very private place, but I’ve never crossed some invisible line I set for myself. I think all my kids have tattoos, (There are some things a mother doesn’t ask.) and I’ve noticed various piercing come and go.

I’m thinking about a prequel to my California Romance Series (available as a set (California Wishes) on April 18 for under $1). In the first book, California Sunset, there’s a minor character named Sunshine.  Our introduction to her is a brief encounter with her boss, John Johnson, the hero of the story:

“What‘s up, John?” Sunshine asked when she sauntered into the office. “You‘ve got this silly smile on your face.”

He frowned at the soft face of the older woman, pretending he was giving her a stern lecture. “Ah, Santa Cruz. The place where employees have permission to tell the boss whatever‘s on their minds.” With her graying hair in a long braid and feathered earrings, she was living proof that the 1960s counter-culture was alive and well on the Central Coast of California.

Sunshine shrugged. “We were raised to ‘Question Authority.’  You‘re authority and I‘m questioning. Is there a problem?”

Okay, not the image most people have in mind when they think kick-ass heroine. But maybe it’s a step in the right direction. What do you think? Do bad-girl heroines appeal to you? 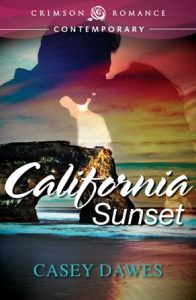 Sign me up!
We use cookies to ensure that we give you the best experience on our website. If you continue to use this site we will assume that you are happy with it.Ok