Book 3 of the Montana Christmas series. 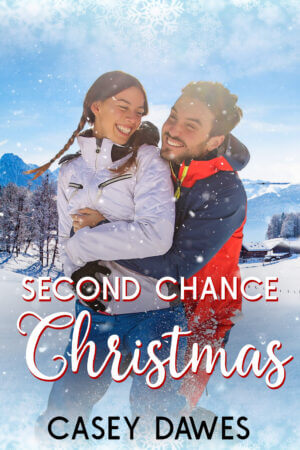 She can’t trust anyone, including her ex-boyfriend. Someone is out to get her. The problem is figuring out who before it’s too late.

Findley Callahan has until Christmas to prove to the court she’s a better parent to her learning-disabled child than her philandering ex. She takes the first job offered—unaware that it’s at a firm run by a man who destroyed her family and drove her father to suicide.

When he was a senior in high school, Reese Moore was quite sure he was going to spend the rest of his life with Findley. But tragic events split them apart and sent them in opposite directions. Now she was back, and his heart was ready to pick up where it left off.

But trouble returns to the Moore’s company, and once again a Callahan is accused of stealing from the company. Findley needs to clear her name fast, or she’ll lose everything that matters.

Second Chance Christmas is a non-steamy new adult romantic suspense. It is the third in the Montana Christmas series but can be read as a standalone. So get your Evening in Missoula tea brewing and start reading!

Pre-order Second Chance Christmas today to find out if a second chance really is possible!

Findlay Callahan’s bare fingers gripped the steering wheel as she pulled into her mother’s driveway in Missoula, Montana. The crunch of gravel drowned out the soft snore of her four-year-old daughter, sound asleep in the back seat. The little girl was safe for now.

She turned off the car and breathed a sigh of relief. The normal seven-plus hour drive from Seattle had stretched to ten with frequent stops. Long trips made Kelly Anne cranky. Only a potty stop would do.

The girl didn’t drink enough to have to go that much.

Six months. That’s what the judge had given her to prove her case. If she failed, it would be the worst Christmas in her daughter’s life.

She wasn’t going to let that happen.

Leaving a sleeping Kelly Anne in her car seat, she pulled a few suitcases from the trunk and headed up the sidewalk.

“Hi, Mom,” she said when her mother opened the door.

Instead of answering, her mother pulled her close, like she’d done when Findlay was a child who’d had a rotten day.

Now it was a rotten life.

“Poor little thing. I’ve got your rooms all ready. Let me take your things.”

Her mom’s shoulders strained under the weight of the bags, but she lugged them toward the back of the house anyway.

Findlay returned to the car to rouse her daughter.

“Okay, sweetie. We’re at Grandma’s. Remember I told you we were coming to stay with her for a while?”

The panic in Kelly Anne’s eyes dimmed at the word Grandma.

“Yep, that’s right.” She lifted the child from the car seat. “Can you walk, sweetie?”

Her daughter gripped her hand tightly as they plodded toward the house. If they were lucky, nothing would distract her from the straight shot.

When they got close, her mother opened the door.

Kelly Anne yanked her hand away and ran to her grandmother. Mom scooped her up and swirled her around, the girl’s fine blond hair flying about her head with the movement.

Joy filled Findlay like water pouring into a dry well after a soaking rainstorm.

“Nuggets!” Kelly Anne dashed down the hallway before stopping abruptly. She turned around, forehead furrowed, and stared at Findlay.

“Kitchen is that way.” She pointed to the archway.

“Not any better?” her mother asked.

“She never will be, Mom. It’s not a disease; it’s the way her brain is wired. There are some things she’s going to have to relearn again and again for the rest of her life. Once she’s been here for a while, she’ll remember where things are.”

Their third therapist had finally diagnosed the problem: a learning disability that caused her daughter to be overwhelmed by changes. The knowledge had increased her ex’s subtle derision of Findlay’s ability as a mom.

He didn’t think she did anything right.

Findlay blew air out in a big puff. Her daughter was safe from Chris’s sharp tongue for now.

She trundled toward her room in the back.

“I got you 2 percent milk for your coffee in the morning,” her mom said as she entered the kitchen. “Just like you use. And there’s a bottle of Chardonnay in the fridge. Figured you’d enjoy it after the long drive from Seattle.”

“Thanks, Mom.” Findlay kissed her mother’s cheek. “You’re the best.” She pulled a wineglass from the cupboard where they’d been stored for the last fifteen years of her life, poured a glass of wine, and leaned against the counter while her mother nuked a plate of nuggets. Everything in the kitchen was spotless, outdated, and familiar—the old stove with the tilted electric burners, the side-by-side Sears fridge with the cracking gaskets, and the dish rack on the yellowing countertop.

It hadn’t always been that way. Brian Moore had stolen everything they had, including her father. Someday, somehow, she was going to get her revenge.

“You should rest tomorrow,” her mother said, “Get Kelly Anne settled in.”

“Not if I want to keep custody,” she said quietly, glancing at her daughter, who was happily gnawing on nuggets.

“When’s Daddy gonna get here?” Kelly Anne paused with a nugget in the air.

Knife to the heart.

“I told you, sweetheart, Daddy needs to stay at home for now.”

The drawn-out word meant bedtime. She exchanged glances with her mother.

“Do you want to see your new room?” Mom asked. “There’s someone there waiting to meet you.”

“Well, let’s go then. We’ll stop at the bathroom first and get you cleaned up. Mr. H and his banana aren’t going to want to meet a messy girl covered with ketchup.”

“Why does he have a banana?” The nugget dropped to the plate, and Kelly Anne slipped her red-stained hand into her grandmother’s as they left the room.

The late afternoon summer sun streamed through the window. Findlay picked up her daughter’s plate, dumped the food from it, and washed it, staring out the window as she did. Summer in Montana was precious for its brevity. Kind of like her daughter’s life. Kelly Anne grew up more every second, it seemed.

She needed to snatch every moment she had.

But even that would have to wait. Finding a job was her top priority.