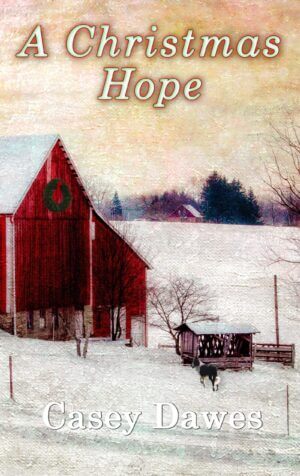 Struggling entrepreneur Clara Misowski believes in Christmas hope. Artisan cheesemaker Sam Richards hasn’t celebrated in a decade. Will her determination be enough to make him believe in Christmas romance?

Three failed businesses and an abortive marriage have made Clara doubt her ability to make a success of anything. Her latest venture—a tasting party and culinary road trip business she’d named The Perfect Plate—is her last chance at independence. She’s gambling it all on a Christmas weekend in upstate New York.

Sam is comfortable with his border collie, his sheep, and his artisan cheesemaking business. No Christmas cheer needed. He wants no part of Clara’s plan to include his business in her tour. When she shows up to convince him in person, complete with broken down van, her constant good cheer rubs against him like sandpaper.

Buy this Christmas romance on Amazon or other online retailers.

Clara Misowski stared at the man on the six o’clock local evening news.

His craggy face, guarded by a thick, but trimmed, black beard reflected the stony countryside behind him. His wild locks blew in the chilly late November wind.

Heathcliff in the flesh.

Clara leaned forward on her couch. She ached to reach through the plasma and touch him to make sure he was real. His piercing eyes taunted her with their vibrancy.

Maybe she was the crazy one. Longing after a man on television was a sign of true desperation.

Three failed businesses and an abortive marriage had made her doubt her ability to make a success of anything. Her latest venture—a tasting party and culinary road trip business she’d named The Perfect Plate—would be her last chance at independence. Her most recent bank statement had shown a pitifully small balance. If something didn’t change soon, she’d need to get a job. The thought of working for someone else made her shudder.

When her husband left her to move in with his secretary—how clichéd is that?—he’d made it clear he thought she didn’t have anything to offer a real man. “You’re too flighty,” he’d told her. “You can’t keep house, can’t run a business, and definitely can’t keep a man satisfied in bed.”

Clara glanced back at the man on the television. He looked like he’d never known a happy day in his life. He’d probably make her miserable.

Then why did she have a burning desire to meet him?

She must be certifiable. That was the only possible answer.

While she spoke the unsmiling man stepped farther away from the reporter as if he might catch her fame.

“When he left for college, along with many of the young people from this small farming town of Roxbury,” the report continued, “few expected him to come back home. But Sam Richards did return, a small sign that the brain drain from this charming, but rural, agricultural community may be reversing. Since his return, he’s converted the family dairy farm to an artisan cheese-making operation.”

A charming small town. Sounded like Clara’s kind of place.

She grabbed a piece of paper, wrote down “Sam Richards,” “cheese,” and “Roxbury, NY,” and went back to staring at the screen.

The camera followed the reporter as a black and white dog herded her toward Sam. When the dog successfully achieved its goal, it sat and waited for praise from its master.

Sam glanced at the dog, a hint of a smile softening the hard planes of his face, and patted its head.

“What made you decide to return?” the reporter asked before she thrust the microphone into Sam’s face.

The man’s features closed back down.

The reporter wiggled the microphone.

Sam shrugged. “I never bought the line of bull that a city’s a better place to live, and an office job is the only career.” He gestured to the sheep scattered across the meadow and the tree-covered mountains in the distance. “This is how people are supposed to live.”

Sheep. He owns sheep. Why can’t he make cheese from cows? Or even goats?

While the reporter closed the segment, Clara turned on her computer tablet and searched for “artisan cheese Roxbury NY.” Halfway down the page, she saw what she was looking for: “Richards Handmade Cheese.” His website was a bare-bones effort that explained how he made the cheese, and where she could buy it. The “About” section pictured Richards with his dog, but gave minimal information about the owner.
The company’s phone number hid in tiny numerals at the bottom of the page.

No wife or partner was mentioned.

She sighed. I’m lusting after a man I don’t know who obviously wants to be left alone.

But it’s late November—almost Christmas, her more optimistic self whispered. Isn’t that what the season is about? Hope that things will change? Maybe with the right tactics, I could convince him to rediscover the joy of the season.

Clara searched the internet for more information about the town. As her fingers slid, flicked, and tapped over the screen, she realized Roxbury would be a great place for her first long-distance tasting and shopping trip. Besides the handsome cheesemaker destined to break her heart, there was a winery, a farm with exotic animals, and a bed and breakfast with organic foodstuffs and local handcrafted items. Google Earth showed a farm-studded area hugging the rough contours of the Catskill Mountains.

Once snow fell, the area would be Christmas card picturesque.

The owners of the winery and animal farm should be easily convinced to set up demonstrations for the clients of The Perfect Plate. Sam Richards might be a little more difficult.

Maybe if she showed up in person, she could persuade him. She could make the trip to Duchess County on Friday.

The impulse to visit Sam Richards galloped through her brain, while logic pulled at the reins. She ignored the tug of common sense.


“I give A Christmas Hope 4 stars for its Christmas Feeling.” ~ Linda Romer

Buy this Christmas romance on Amazon or other online retailers.